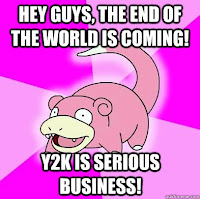 At the rollover of the 1990s into the 00s, fandom was digesting the collectability of Pokemon, Yu-Gi-Oh!, and Digimon in Japan, while America was awash in the competition between the likes of ADV Films, Viz, Bandai Entertainment, CPM, Media Blasters, and Pioneer. Perhaps due to the thickness of the market, Patrick Stoeckel's analysis on the biggest shows from the last year of the last millennium was just so big that he decided to give us a glimpse on the lesser-known shows of 2000 that were lost in all the kerfuffle.


As I look at more animated output for the year, I'm struck by the connections to the past. As the 20th century drew to a close, anime studios had a great opportunity to examine Japan's history and see where the country's headed. John Coltrane's 1942 rendition of "I'm Old Fashioned" makes for a good piece to listen to while writing this article; as the years pass by, being old-fashioned isn't so bad when you have someone to be old-fashioned with. The approach of a new millennium provides ample opportunity to see the history of a society, and where to go from here.

Legendary Gambler Tetsuya, a Toei production based on the manga by Fuumei Sai and Yasushi Hoshino, debuted in October. The story is based on autobiographical novels written by Takehiro Irokawa, who actually participated in mahjong gambling. The story takes place in the immediate postwar period, during the Occupation era. Gambling has a storied history in Japan; strict bans on the practice existed during the Meiji period and World War II, but after the war, Japan experienced a resurgence in gambling. The Occupation government installed gambling machines, and Tokyo's downtown became an American nightspot.


Like Inuyasha, Legendary Gambler Tetsuya examines Japan's past, although its setting is far more recent. The Occupation after World War II remains a rather touchy subject in Japan, as the American forces brought with them some rather seedy aspects, including nightclubs and gambling dens. Japan at the time experienced great starvation, and gambling became a means of escaping that harsh reality. Legendary Gambler Tetsuya offers a window into this heady climate.

The protagonist, Tetsuya Asada, lives in a world of neon and ramshackle buildings–the world of prostitutes and gamblers. The black market thrives here, as citizens desperately seek to recover from the devastation of war. Recovery is slow, but historically, Japan would rebound by the 1950s. The anime begins with people living in poverty; most can only afford soup to eat. However, Tetsuya, the "legendary gambler," can afford sushi with his mahjong winnings. He lives in Shijuku, which appears as a shell of its former self; it doesn't resemble the entertainment center we see it as today. Instead, Shinjuku houses numerous mahjong parlors and a thriving black market, where people go to find basic necessities. The mahjong parlors literally exist below street level, away from the prying eyes of the general public–and the police. One must know where to look in order to locate these smoke-filled rooms, where salarymen gather to gamble. Money speaks here, as people want cold hard cash. Mahjong parlors still have the public image of a seedy nightlife, and Legendary Gambler Tetsuya presents them as no less disreputable.


Boys Be... follows the romantic relationships of three couples through the course of a year. The anime has four three-episode divisions, each division representing a season, with a final thirteenth episode rounding the story out. This work remains Masahiro Itabashi's most famous work–he's written A Girls and The Piano Doctor since then, but Boys Be represents his magnum opus. Separating the series by season parallels the story's romantic development. Each season represents a different aspect of teenage love–spring being the first throes of romance, for example, and winter being the time of the ultimate decision. Kyouichi, the main male protagonist, eventually retreats from his relationship with Chiharu and goes to Hokkaido in order to gain perspective. Summer saw the two separate romantically when Kyouichi caught Chiharu kissing another boy, and their potential reconciliation becomes a focus. Of course, Kyouchi doesn't follow through on this (he left for Hokkaido, after all), and without this moment of reconciliation, we're left wondering if Kyouchi can learn to love again. His Hokkaido trip offers him the opportunity to reflect on the nature of love, and how easily one can enter (and subsequently leave) a relationship. The world is a maddening place, filled with troubling emotions that people have great difficulty understanding. Kyouichi wants to figure out what it means to be in love, and whether he can maintain a relationship. Chiharu's experiences parallels Kyouichi's–she wants to understand love as well, and she wants to give Kyouichi a chance at the end.

Boys Be's soft colors complement the story. Experiencing romance as a teenager is its own roller-coaster ride, and the series provides some nice, soft tones for it. When the series winds down, and Kyouichi leaves to re-discover himself, the characters all have their own stories to tell, and Kyouchi discovers his hesitance–he can't seem to forgive himself more than anything. The penultimate episode's title is "End to Beginning," and the quote that bookmarks it refers to a sense of renewal. The New Year brings with it a sense of renewal; things must end, but with every ending, a new beginning arrives. Even though the previous year had its romantic turbulence, life moves on, and the characters will as well.

When Ayashi no Ceres debuted in April of 2000, mangaka Yuu Watase had already established herself with Fushigi Yuugi, which also received an anime adaptation. However, Ayashi no Ceres garnered the Shogakukan Manga Award for shoujo, her first award for her work. The story deals with Aya Mikage and her twin brother; on her sixteenth birthday, Aya discovers that she's the reincarnation of Ceres, a powerful maiden–a theme that it shares with Inuyasha. The legend of Ceres, however, is a tragedy–Ceres seeks revenge upon the Mikage family for stealing her hagoromo, which prevents her from re-entering heaven. This connects the series to a mystical element, specifically, the tennyo, female beings who wear beautiful kimonos and typically carry the lotus blossom. 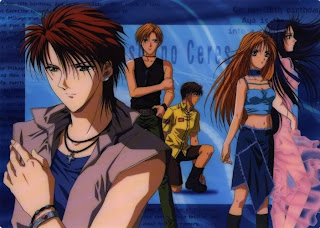 Aya's future has already been determined in the first episode, when a fortune teller informs her of an encroaching darkness. This lingering shadow arrives with her status as Ceres's reincarnation, with its attendant bitterness and family strife. Aya must now fight her own family, who doesn't want to return Ceres's hagoromo. The conflict transcends humanity and involves the supernatural. The series also includes commentary on genetic engineering; Yuu Watase sees technology as something that shouldn’t be abused, and the character Kagami reflects her concept on how people should not act.

Ayashi no Ceres's story also served as the basis for a Noh play and inspired Osamu Tezuka's Phoenix. The Noh play in question, Hagoromo, remains one of the most popular and rehearsed among the repertoire. Although traditionally attributed to Zeami, this play actually predates him. Ayashi no Ceres thus combines a classic tale with commentary on technology; by infusing a legend with insight on how technology can be abused, the anime presents a cautionary tale of how such technological advances can lead to ruin, a more recent example of the "dangers of society" parable examined by such films as Gojira. Ghost in the Shell tackled the subject before, in the vein of a philosophical examination of man's relation to his own creations; what makes someone human in a society defined by an enormous electronic network where someone can upload his consciousness into a mechanical frame? With Ayashi no Ceres, the focus is on genetic "perfection," and how the very human product of genetic engineering relates to the world around her.


Among the other shows that debuted in 2000 was Hajime no Ippo, one of a long line of anime about boxing. Ashita no Joe set the standard for the genre in the 1970's; that anime featured a roaming man without a true calling and prone to violent confrontations. Here, we have Ippo, a shy individual with a great boxing potential that gets recognized by a professional boxer who rescues him from a beating by thugs on the street. Unlike Ashita no Joe (which featured a destitute environment), Hajime no Ippo takes place in a moderately less severe setting; Ippo plies his trade at his family's fishing store, and his introduction to boxing takes down a road to self-reliance and self-confidence. His training begins with a simply exercise: catching leaves as quickly as possible as they fall from a tree. Ippo realizes how difficult this is, but he perseveres.

Boogiepop Phantom rounds out this article. Part of the Boogiepop series (which began with Boogiepop and Others), this series continues the story of the legendary "Boogiepop", a supposed shinigami. The anime provides a non-linear narrative, with a vignette aesthetic style, looking into a society where "evolved" humans and the Towa organization are at odds. The central character, Boogiepop, has a habit of whistling "Die Meistersinger von Nümberg", a three-part opera by Wagner and speaking in an archaic manner. Students see Boogiepop as a legend, but she's very much real–and operating among them. The story's fractured narrative focuses on the effects of a Manticore drug, a mysterious beam of light and a serial killer, with the Towa Organization at the center of it all.


Keeping up with the story as it unfolds is a task unto itself, thanks to the aforementioned narrative structure, but it's not terribly difficult. The central character, Dr. Makiko Kisugi injects several people with an experimental drug (starting with herself) that causes heightened awareness of people's fears; the drug unfortunately has a terrible consequence–Kisugi becomes a serial killer after obtaining a taste for fear, especially from strong-willed people, and targeted girls. The fragmented narrative allows the mystery to slowly reveal itself. 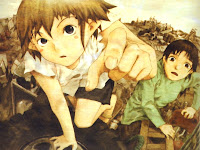 As a means of wrapping up here, 2000 also saw the release of NieA_7. Based on a doujinshi by Yoshitoshi ABe (who created Serial Experiments Lain and Haibane Renmei), NieA_7 features Mayuko, an introverted scrounger trying to make a honest living away from her family, and the eponymous "NieA", a free-loading alien living with the aforementioned human. NieA has faced discrimination amongst her fellow aliens, resulting in her accusing discrimination among humans who treat her somewhat poorly.


2000 marked the last year of the second millennium, a perfect time for retrospection. Japan experienced quite a bit, and the latter half of the 20th century was a hectic time for both the country and the world. Japanese studios examined the country's past, from struggle and hegemony during the Sengoku and Edo periods (Inuyasha) to a post-World War II recovery (Legendary Gambler Tetsuya). With a new millennium on the way, studios could examine Japan's storied history and have it connect with the modern day. In the case of Inuyasha, this connection becomes literal–a well becomes a portal between eras, one side being the present (at least, the present of the show), the other being a heady past inhabited by miko and monsters. With Tetsuya, we have a glimpse into the immediate post-war period, where Japan must recover from a crushing defeat at the hands of the Allied forces. The central figure of Tetsuya brings us into the realm of underground gambling, a "floating world" echoing those scenes found in ukiyo-e prints.

Next time: we officially enter the 21st century! What was awaiting us in 2001?

Boogiepop: The Ultimate Guide: http://www.gomanga.com/news/boogiepop_02.php
Posted by Geoff at 2:26 PM