Owen writes copy for a living, and has been known to occasionally extend that ability to anime, although it's a while since he did so. When he's not attempting to finish his backlog of games on Steam, he can be usually found on Twitter, trying to break language 140 characters at a time.

Everyone knows how this list ends. It's the beginning, however, that makes the most of what it really is: an unbridled look at nostalgia barely six years old. That's kindergarten age! How do you tell Nostalgia that they have to get out of the house, put on a uniform, and play nice with the others? One week at a time, I think.

For this year, I decided to focus on seven original, made-for-anime works. No adaptations, please; we try to keep the riff-raff out. The emphasis on "made for anime" here was a no-brainer; the problem with adaptations, inevitably, lies in how the original's vision has to be molded to fit into the target medium, and in this case anime. In this the premise of an adaptation is usually flawed; the arcs in a manga are either ignored or overtly drawn out, the sparse text of a light novel becomes a plodding 25-minute exercise in animated dramas, and the less said about visual novel adaptations, the better. 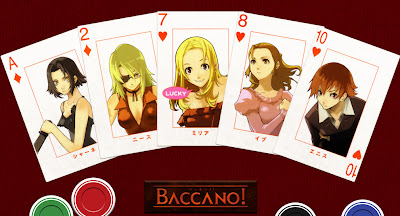 "Original", of course, tends to be usually tenuous, but was defined here simply as "a story that did not exist in any form or medium prior to the anime." Filtering with this criterion was mindboggling--there was no Baccano, for instance. No Bamboo Blade. Not even Gakuen Utopia Manabi High, which, to my surprise, actually existed as a manga by ufotable before it was an anime.

By the time I was finished, there was one problem: the ones that were original weren't good, and the ones that were good weren't original. Shigurui? A straight-up adaptation; possibly one of the best around, but an adaptation nonetheless. Dennou Coil? Didn't sit well. Towards the Terra was a manga, albeit one decades old and entirely changed from its origin, as were Bokurano, Hitohira, and Hidamari Sketch. Gigantic Formula felt too mecha-heavy by way of visual references and homages, while Sky Girls was relatively simplistic.

In the end, I decided to separate the seven works by the tentatively fragile genre trappings they employed: mecha, romance, and vignettes. Mecha, of course, deserved no further explanation. Romance explored the age-old question of love, and all its trappings. Vignettes told short stories that explored a greater whole.

This week is dedicated to exploring the first of the three: Mecha. Because everyone loves a giant robot or ten.