AJtheFourth is a writer for the team anime blog Altair and Vega. When she's not writing about anime or working an unfortunate retail schedule she can be found bemoaning the Red Sox and the Packers, running, painting, playing altogether too much League of Legends, and fervently wishing she owned a Bernese Mountain Dog so she could ride it like Chiyo-chan in Azumanga Daioh. Her favorite anime include Aim for the Ace!, Touch, Rose of Versailles, Revolutionary Girl Utena, Honey and Clover, and Do You Remember Love?


Initially, I had chosen the year 1978 upon noticing that one of my favorite series of all time, Aim for the Ace!, had aired in that year. Upon further inspection, it became clear that it was the second season of the shojo adaptation and not the infamous first series that saw Osamu Dezaki burst onto the anime scene. This turned out to be a fortuitous oversight, as 1978 was a breakout year for one of the most influential creators in manga and anime history: Leiji Matsumoto.

Although previous works of his had been adapted for the small screen, 1978 saw Galaxy Express 999, Space Pirate Captain Harlock, Starzinger, and of course the continuation of his first known success: Space Battleship Yamato.

Reverse Thieves is a detective-themed blog and podcast duet by Narutaki (a.k.a. Kate) and Hisui (a.k.a. Alain). With a character-based and story-based focus they look at all genres of anime and manga from the origins of the mediums up to the most current, as well as American TV and comics and many things in between. They try to emphasize the positive by celebrating titles they enjoy while promoting little-known gems. Follow all of their reviews and their unique perspective on Japanese culture at reversethieves.com. 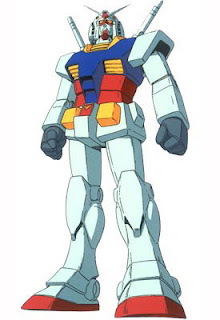 1979 was an amazing year for both TV and film anime. It saw the release of seminal parts of franchises like the Galaxy Express 999 movie and The Castle of Cagliostro starring Lupin the Third. It was also the year of Mobile Suit Gundam and The Rose of Versailles, two shows on opposite sides of the spectrum in terms of genre and setting.

One way of breaking down the year would be to divide it into two major components: historical dramas that looked to the past for tales of adventure and romance; and in contrast, war stories challenging the future of planet Earth and the vast reaches of space. A majority of the shôjo (and even a bit of the shônen) shows in 1979 used historical Western settings. At the same time, almost any show not set in the past was set in a future where soldiers fought against impossible odds as the last hope for peace. Mobile Suit Gundam and The Rose of Versailles exemplify these two major movements.

Akiko Sugawa-Shimada, Ph.D. is assistant professor of Department of Foreign Languages of Kansai Gaidai University, Japan. She is the author of a number of articles on anime, manga and Cultural Studies, including "Rebel with Causes and Laughter for Relief: ‘Essay Manga’ of Tenten Hosokawa and Rieko Saibara, and Japanese Female Readership" in Journal of Graphic Novels and Comics (2011), "Animation and Culture" in Encyclopedia of Animation (2012), "Fruits Basket" in The Survey of Graphic Novels: Manga (2012), An Introduction to Anime Studies: Nine Tips for Research on Anime (2013), Girls and Magic: How Have Girl Heroes Been Accepted (2013), and Japanese Animation: East Asian Perspectives (forthcoming).


1972 saw some of the more significant anime works that impacted the Japanese toy industry, fan culture, and children’s education, particularly from a foreign perspective. Around this time, Channel 8’s (Fuji Television Network) was starting to screen the "Calpis Animation Theatre" slot that introduced anime shows based on foreign children’s’ literature. The Calpis Animation Theater was renamed several times depending on its sponsors, such as the "Kids’ Animation Theatre", and the "House Animation Theater", but generally the shows of the series are known as the "Theater for World Literature", in which Isao Takahata and Hayao Miyazaki participated with Heidi, Girl of the Alps and Marco.


During the same time period that Mokku of the Oak Tree (Kashi no Ki Mokku), a retelling of the piece of children's literature, Pinocchio, was aired from January to December, Moomin (ムーミン) was broadcast in the Calpis Animation Theatre block. (The 1972 series was actually called "New Moomin", as the original ran in 1969 and 1970. - Ed.) This story was based on author Tove Jansson’s children’s literature of the same name, in which the vivid lives of the fairy tribe called Moomin in the Moomin Valley were depicted. The protagonist, Moomin, was played by Kyôko Kishida, a famous actress with considerably unique voice, but the cute looking characterizations of Moomin and his friends with huge round eyes were so far from the original illustrations that Jansson expressed her strong discomfort to this work. However, this distinguished work immediately gained much popularity among Japanese children. 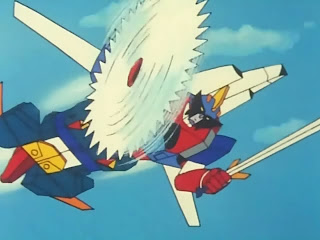 Mike Toole (@michaeltoole) saw episode 3 of Battle of the Planets, “The Space Mummy,” on TV in the autumn of 1980. He was 4 years old. He didn’t know it was from Japan, but he did know he dug the hell out of it! More than 30 years later, he’s still digging the hell out of Japanese animation. He’s written for Animerica, Otaku USA, and Sci-Fi Magazine, and currently writes The Mike Toole Show, a biweekly column for Anime News Network. (Full disclosure: Mike's one of my closest anime chums. Friendship is magic, guys. - Ed.)


I don’t remember 1975 too well, because I hadn’t shown up yet. I did show up in March of ‘76, so I guess I existed for the last few months of ‘75, at least nominally. There’s something fascinating about studying events from before you were born, isn’t there? In some ways, looking at the pop culture landscape makes it all seem closer and more real, so let’s check out Japan’s animated pop culture landscape of that fiftieth year of the Showa period. 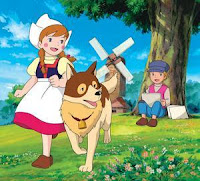 1975 would start off right with a wonderful, painterly, heartbreaking TV adaptation of Ouida’s novel Nello Dies at the End, better known to us folks as The Dog of Flanders. What we’ve got here isn’t just a beloved adaptation of a famous story—it’s the first of Zuiyo Eizo’s numerous animated works (we know ‘em as World Masterpiece Theatre) to feature the contributions of animator Yasuji Mori. Mori-sensei’s one of those guys whose obscurity among younger fans is a little frustrating—I’d describe him as Miyazaki before Miyazaki, although he didn’t boast the Ghibli co-founder’s scriptwriting talents.

What he did do was build, from the ground up, the animation aesthetic of Toei Doga itself, starting right with their first feature film, Hakuja-den, for which he provided storyboarding and key animation duties. 1975 started with one of Mori’s best and most well-remembered works, and after the studio changed its name to the somewhat more memorable Nippon Animation later in the year, Mori would work on another adaptation of a famous novel, Prairie Girl Laura, which we westerns would more immediately recognize under the story’s original title, Little House on the Prairie.

1975 wasn’t really the year of animated classics of children’s literature, though. Yasuji Mori did great stuff in that field, but if I had to point to a single creator whose work dominated the mindshare of Japanese cartoon dorks in 1975, I could really only point to Go Nagai and his seemingly limitless army of super robots. The super robot occupation started in March with theatrical screenings of Great Mazinger vs Getter Robo, a short feature film that began with the titular titans squaring off and ended with them teaming up to face an even greater threat. This, of course, wasn’t merely a chance to set little kids’ minds afire with the spectacle of two awesome robots in the same cartoon-- it was a prelude to the TV debut of Getter Robo G in May.

Justin Stroman is the founder of Organization Anti-Social Geniuses, a Japanese Pop Culture blog. Has been watching anime for a good decade, but it wasn’t until he started blogging that his interest in watching anime and learning more about some of its history picked up. If he’s not blogging, you can find him on Twitter tweeting or re-tweeting any anime, manga, or sports information (good or bad) on Twitter.

The first thing I should mention is that the Golden Ani-Versary project is what I think a great tribute to decades of Japanese animation. To be a part of celebrating 50 years of anime alongside many other bloggers and writers is something I wouldn’t have thought I’d be doing not even two years ago, where I liked anime but not enough to dig further deep into the fandom and start blogging myself. As this project continues, I hope that this site and the articles already written and will be written in the future serve as great commentary on how anime has evolved from its past to its present, and perhaps this will give us insight into how the future of anime will be.

Now, in volunteering for this project, I immediately desired to cover some of the early years of Japanese animation, if only to figure out how anime was well before I was born compared to today, and discover what works allowed the medium to keep growing to what it has become today. Needless to say, with limited credentialed information either via the web or in print, it wasn’t quite that easy to find everything, so maybe there were anime that aired during this period that I could not extensively cover, and even the ones I did maybe not enough coverage. But in the end, I discovered what I felt to be the most significant anime series of 1974.

So, let’s get started.