1987: The Adolescence of Art Forms, Animated

I'm no archivist. My purpose isn't to recite to you every last detail of 1987—which wouldn't be much of a celebration—but to try and distill the character of the year into something coherent and compelling. I'm here to entertain, to deliver a story, and if you'll indulge me for a while, I hope it will be a good one.

The television adaptation of Saint Seiya (also known as Knights of the Zodiac), based on the smash hit manga by Masami Kurumada, began airing in October 1986 and ran for 114 episodes, ending in April 1989. This technically places the show outside the scope of what I'm supposed to be telling you about, so I'll leave it to others to explain Saint Seiya in detail, because my objective isn't the show itself, nor its contents. Rather, what interests me is Saint Seiya's existence at this specific point in time, juxtaposed against the anime of the year.

1987 was a remarkable year for manga adaptations. Not remarkable in volume—manga adaptations were nothing special in themselves—but for the commonalities that emerged. This year, we would find anime reaching for a measure of subtlety.

In the spring, two legendary artists destined for lifelong rivalry had similar stories cohabiting the airwaves: Rumiko Takahashi's love comedy Maison Ikkoku was now midway through its TV run, while the popular anime Touch, based on the baseball manga by Mitsuru Adachi, had ended in March after 101 episodes. This much-beloved show was immediately replaced in the same timeslot by another Adachi adaptation, the love comedy Hiyatari Ryoukou!

Hiatari Ryoukou! and Maison Ikkoku are far more alike than different; both feature a boarding house with oddball residents and a simple romance made complicated. Adachi's manga originally ran in a shoujo magazine, so the presence of Kasumi, a female lead, with a mostly-male supporting cast, isn't very surprising (though this was no Ouran High School Host Club—the guys are more memorable than attractive). Their hijinks are goofy and innocent. But Hiatari Ryoukou! was adapted into a drama five years earlier, and despite the medium’s tendency to indulge in slapstick, the anime version still reads like a live-action story. There is, in its visual sensibility, a pervading sense of realism.


This was also the year of Kimagure Orange Road, the magnum opus of the young manga artist Izumi Matsumoto. A classic of Weekly Shonen Jump, the main draw of Kimagure Orange Road was the love triangle between Kyosuke, the dark-haired delinquent Madoka, and her best friend Hikaru. The show is comedic in an adolescent way, and there's a subplot involving psychic powers, but like Hiatari Ryoukou!, from the beginning Kimagure Orange Road is grounded in the real world, both emotionally and visually. Under the capable directorial hands of Osamu Kobayashi, the anime even enjoys the occasional cinematic flair.

As a third example and something a little different, I point to City Hunter. The hardboiled detective series by Tsukasa Hojo received its first anime this year in a franchise that would eventually span multiple seasons of TV, OVAs, movies, and, in an odd development, a K-drama in 2011. (Hey, let's not forget the 1993 Jackie Chan movie adaption and its inexplicable Street Fighter sequence! - Ed.) While Ryo Saeba's adventures feature slapstick and perverted humor, the story takes place in modern Tokyo with murder and political corruption rampant. The usual escapism of anime gets grounded in a milieu that would be recognizable in a contemporary action movie.

Perhaps you see the pattern.

Of course, make no mistake; anime in 1987 was still primarily made for children. This was a year of noteworthy adaptations for young audiences, too. World Masterpiece Theater's Little Women (the second adaptation of Louisa May Alcott's story, after Toei's in 1981) featured character designs by Yoshifumi Kondou, who would become famous for his work at Studio Ghibli. Esper Mami, a manga series from the late 1970's, finally got its due with an anime adaptation that would last for 119 episodes and become beloved both inside and outside of Japan. 1987 can even lay claim to one of the first cooking battle shows, the adaptation of Daisuke Terasawa’s manga Mister Ajikko.

When it came to children's TV, Japanese animation studios interacted with the global market in some remarkable ways. The first-ever Hello Kitty anime was produced this year, Hello Kitty's Furry Tale Theater, a joint Japanese-American production that aired on CBS the same year. (Some of you may have even grown up with it.) And rather than import the ending of the original Transformers show from America, Toei Animation made its own series, Transformers: The Headmasters, creating a Japan-only continuity for the popular show.

And so on. Business was good.


But the state of anime at this time, as a storytelling medium, is best understood from an unlikely source: Kikou Senki Dragonar, Sunrise's mecha offering of the year. Premiering immediately after the completion of Mobile Suit Gundam ZZ, with mechanical designs by the legendary Kunio Okawara, Dragonar now is like watching a tilt-view of the Gundam franchise, which at the time was still young with only three series. Of course, Gundam would go on to thrive as a franchise, while Dragonar had a year-long run before it was put to rest, but during the pilot episode, as the three heroes stumble upon the secret military robots, one of the characters exclaims:

"It's just like the robots I saw on TV-manga when I was a kid!" 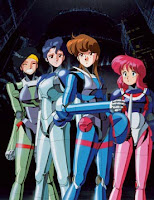 It's a moment of profundity that can only be appreciated now in retrospect. In 1987, television anime had existed for over twenty years. Even Gundam was nearly a decade old. The viewership of anime was maturing, and in some cases they were already grown-up and entering animation themselves. What did these fans want? Perhaps they wanted Fist of the North Star 2, a continuation of the successful first season, where characters engage in over-the-top violence in a post-apocalyptic world. Or perhaps they wanted Bubblegum Crisis, a gritty cyberpunk OVA produced in the heyday of home video with heavy visual references to 1982's Blade Runner. Or perhaps still they wanted shows like Red Photon Zillion (the first anime series by what would become Production I.G.), a science-fantasy set on a distant planet, where aliens were attempting to destroy the human race.

So many options. But what did fans want?


Alongside the other series I've mentioned, Saint Seiya was enjoying some of its greatest popularity this year (the unpopular, anime-only "Asgard" arc wouldn't appear until mid-1988). The show was undoubtedly for young boys, adapted from an action manga that ran in Weekly Shonen Jump—the Naruto of its day, if you want an easy comparison—but the show became popular with adults as well, especially young women. 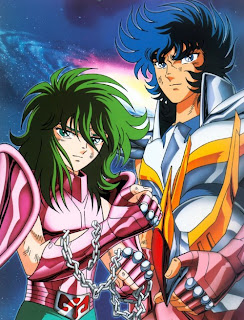 The boom happened at Comic Market, the only place it could have happened. The first Comiket in 1975 was a tiny affair, a labor of love with only a few hundred attendees, but by 1987, at the height of Japan's bubble economy, Comiket was a different beast, much more in the shape we know: a shadow economy of anime. The number of attendees was inching towards 5,000, and doujinshi (fan-made comic) artists were increasingly able to make a living from sales of their work, much of which happened at Comiket. A significant majority of these artists were women, and they really liked Saint Seiya.

The boom was in yaoi doujinshi. Short for yamanashi, ochinashi, iminashi, or "no climax, no outcome, no meaning," what yaoi signifies is comics of straightforward, man-on-man sex. The term enjoyed a boost of popularity this year when fans of Saint Seiya drew yaoi of their favorite pairings and sold it at Comiket. Homoerotic doujinshi wasn't new by any means (and there's a wealth of history on this written in English, if you're so inclined), but as a scene, yaoi was still young and untested. The Saint Seiya boom almost certainly cemented its position.

Imagine this as it was happening. Today, we might call it simply the predecessor of the "Boys Love" subculture, but as the emblem of a year, this moment was powerful, and it possesses more meaning to us than just a change in fortune for a handful of artists. 1987, in fact, was the year that fandom grew from television-fed infancy to a new, wild, and creative youth.

What did fans want? They wanted a lot of things, reaching for some kind of maturity, but what fans wanted, they made happen on the small screen and in the products of their fevered imaginations. They demanded more from the medium, and it affected not just the shows brought to television, but the expansive universe of fandom that orbited in television's glow. People were creating at all levels, professional and amateur; the participatory culture was running at full power.

This wouldn't last. Two years later, a serial murderer, the departure of an icon, and an economic crisis would bring the whole enterprise crashing to a halt. After such catastrophe, we could say at last that the fandom entered the fullness of its adulthood, but in 1987, we were young, and for now the world was ours.