I may as well begin this half of…um, this half…by talking about the types of anime made in 1980 that are at least conceptually recognizable to us in the United States of America: regular ol’ children’s shows. Previous Golden Ani-Versary postings have already discussed Time Bokan at length, so I needn’t elaborate much on the 1980 iteration, Time Patrol-Tai Otasukeman (a.k.a. Rescueman). It’s another Tatsunoko show that follows the now-established formula: Yoshitaka Amano character designs, Kunio Okawara mecha, and most importantly a sexy cleavage-endowed villainess inclined to figuratively (and literally!) lose her top at her two bumbling male subordinates, one of whom looks sorta like Waluigi. You know the drill.


But 1980 was a year that Tatsunoko doubled down on the sexy ladies with two nincompoop guy underlings, for that year we also got Dashing Warrior Muteking. I know this series also features Amano’s designs and was shown all throughout Europe, but really there’s only ONE thing I or anyone in America knows about Muteking, and that’s the pilot dub made of the first episode in which hapless idiotic goon sidekick (this time, he looks sorta like Dr. Robotnik, or “Eggman” if you’re a nagging autistic) exclaims what Corn Pone Flicks in “Bad American Dubbing” accurately pointed out sounds like “Blistering Bullsh*t!” in response to some sort of Orko-looking alien requesting they surrender in the name of justice. 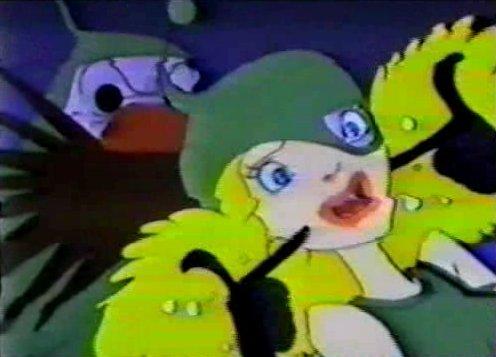 Something more recognizable to us, though often not remembered as “anime,” is The Cheerful Dwarves of the Forest: Belfy & Lillibit. The title of the series sums up what it’s all about, and English speakers may recognize it courtesy of the fact that it was dubbed into English and aired on Nickelodeon’s “Nick Jr” block throughout the first half of the early 1990s under the name The Littl’ Bits. Honestly, I barely watched any of it, but damn if I still don’t remember the theme song. That’s the power of Haim Saban and Shuki Levy for you: writing the catchy tunes of our childhoods that even a bullet to the head won’t remove from your brain.


That Saban was able to localize so much foreign-made children’s entertainment then get them sold to home video distributors and shown on TV is a keystone to why he’s now a multi-billionaire!

Another one from 1980 you may have seen on Nickelodeon is the Nippon Animation-produced movie-length TV special Back to the Forest. It’s about cute animals and a magical fairy living in the forest that, upon discovering that the greedy humans plan to cut down the trees for payola, decide to WAGE GUERRILLA WARFARE after their peaceful protest goes ignored. Imagine frogs hiding in your hats, hedgehogs in your slippers with spines ready to impale your toes, and swarms of bunnies and deer staring at you…motionlessly…silently…in your kitchen…until you go INSANE. Plagues of rats descend upon the Lord’s house, wild boars stampede, and the fairy has the same voice as MINMAY. In a world where creatures can’t simply be slaughtered wholesale the moral is “if you cut down the forest where we live, we’ll end up occupying where YOU live, so save the trees already.” The whole thing’s on Youtube, Celebrity Just for Kids intro and all. Check it out, then snicker at how it ends with a frog saying “I’m coming, I’m coming, I’M COMING!” Oh, Intersound. I know the copyright they list for it says 1989, but are you seriously going to believe THEM over MOI?!

Starting in 1980, Nippon Animation was also hard at work adapting to anime the hit Weekly Shônen Magazine manga Sanpei the Fisherboy. That’s right: it’s the competitive shônen formula of the plucky young kid deciding “I’m gonna be the best!” applied to the high-octane, all-excitement world of REEL FISHING. However, this isn’t some bizarre obscurity; it ran for 109 episodes and the manga ran for a whopping 57 volumes, roughly one chapter per week, over the course of a decade! Its popularity has endured to the point that in 2009, a live-action Japanese version was made. This was a big hit throughout Japan and the world: here’s some of the opening in Italian!


Speaking of hit sports anime completed ignored in the US, 1980 gave us the TV movie anime adaptation of the Shônen Jump manga Captain by Akio Chiba. I know when I think of “great 1980s anime about baseball” my brain patterns begin and end with Touch or Insert Some Other Mitsuru Adachi Work Here, but Captain is still considered one of the all-time greats in Japan. Satoshi Dezaki directed this just prior to The White Whale of Mu, and it was received well enough that a few years later, he’d do a TV series of it. As far as I know, there are no fansubs or scanlations. Here’s one of a series of Japanese fan-made music videos.

I know, I know. Satoshi’s brother Osamu Dezaki was working on a far more famous sports anime in 1980 about boxing that I’ve not made mention of. I’ll save it for next time because you know what I’m talking about. Instead, I’ll talk about a much lesser known, more kid-friendly boxing anime from 1980: Ganbare Genki (“Go for it, Genki!”). The premise is fairly grim: a young boy is orphaned when his father is killed in the ring by the Japanese world champion, inspiring the boy to take up boxing himself. The series takes place over several years, and much like “tomorrow’s” Joe Yabuki, it turns out the champ is rather distraught from his having killed a man. But here’s the difference between this show and the other boxing anime: this anime is mostly a comedy!

Despite the fact that the manga was award-winning, the competition was just too much in 1980 and Genki was canceled after 35 episodes, before it could actually kick off the main arc from the manga. So why even mention it? It’s because this anime was directed by none other than the legendary Rintaro himself. I’ve never seen a single episode of this series, but everything that guy does is either exceptionally great or awful. Who’s to say where this one falls? Given its troubled production, perhaps it’s best I not see it: when I heard the name of its theme song was “Kaze ni Nare” (“Become the Wind”) I got really excited until I realized it’s not the one by Ayumi Nakamura. That “Kaze ni Nare” is one of the most famous Japanese pro wrestler theme songs there is thanks to 25 years of MMA fighter/pro wrestler Minoru Suzuki bringing the pain because HE HAS TO BE A LONELY WARRIOR. Nor is it to be confused with that JAM Project song I always forget exists. No, the Genki one is more like this:


Toei Animation’s Magical Girl Lalabel also got a “movie” that same year. I put movie in quotes because the animation is only about 15 minutes long, but it’s still worth noting because this was made in a long, LONG bygone age where magical girl shows were actually still primarily created for and watched by young girls. Because so much of the “magical girl” formula matches up with the "henshin hero" formula, the plot to Lalabel is quite similar to Magical Princess Minky Momo and the various other magical girl/witch series from Toei. They never expected the same people to watch them all, year to year! Lalabel the witch arrives from another planet with her magical wand, wizard hat, and cute cat mascot to recover magical items taken by a goofy wizard, “Viscous” (who has a slightly more devious-looking cat), all while disguised as an ordinary schoolgirl. Along the way she learns all about the wonderful planet Earth, the country of Japan, and the power of that emotion called "love." Naturally, she eventually comes to love our world so much that by the end of the series when she inevitably uses up all of her magical abilities and is left an ordinary person, she doesn't mind.


Additional talking cat-centric titles (that do NOT involve quite so much Hitler like what we started on): Group TAC’s movie Eleven Cats certainly uh, lives up to its name. It’s pretty inconsequential as far as these things go. I imagine the man who wrote the screenplay, Yoshitake Suzuki of Brave Reideen and Zambot 3 fame, just wanted a break from week after week, year after year, of super robots and uh, exploding children. The whole film’s on—you guessed it!—YouTube, and even though it’s unsubtitled I think you can follow along just fine.

On the flip side of that is Sue Cat, which as best as I can tell is about a…erm…anthropomorphic cat girl *cough* doing her darndest to become a Japanese pop idol. But don’t start yiffing it up just yet; Sue Cat is brought to us by the legendarily terrible Knack Productions. I only know of this beast of a show courtesy of “Don’t Call Me Cap’n, It’s 2013 for Chrissakes” Dave Merrill, who’s on a mission to inform the world of the untapped comic potential that the makers of Chargeman Ken hath wrought upon this Earth. That’s what I get for showing up to his Old School Classroom! Learn all about Knack here.

And in case you’re wondering, 1980 had dedicated talking DOG anime as well. Bark! Bun Bun is about a cute white puppy abandoned by its owners traveling the world to find his mother. He meets other stray dogs along the way, such as the grandfatherly old dog, the big tough dog that can fight polar bears, and even a lady friend. Please don’t mix Bun Bun up with 1986’s Silver Fang: Shooting Star Gin, which was about a white puppy gathering up the toughest dogs of Japan to fight the possibly cybernetic bears, because I distinctly said Bun Bun was CUTE. It’s an easy mistake to make though, because this little guy was remembered enough to be made into a movie in 1987, right around the same time as Gin. I know this isn’t technically from 1980, but here are some partially subtitled clips of that Bun Bun movie from a licensing pitch video reel, featuring the late Kaneto Shiozawa as the dog who looks most likely to start rapping aboard the Titanic.

So there you have it! That’s about 5000 words about the anime from 1980, which is about seven or eight times more words than what most Internet users are willing to read on a computer screen, AND I’m not even done! While you’re probably thinking right now “get a load of all this crap Daryl decided to bring up,” remember: almost every single thing I mentioned was released throughout the world in multiple languages, sometimes even in English! Within these are the childhood memories of many a person who’s since grown up, possibly not realizing that what they were watching was Japanese animation all along. Think about it: most people in America didn’t know Speed Racer or Battle of the Planets or even Voltron were from Japan, but you wouldn’t argue THOSE shows didn’t matter. On the golden anniversary of anime, titles such as these are a critical aspect of what made “the golden age of anime” that to begin with, and it’s something that’s very easy to overlook in our haste to talk about how the aspect ratio changed once the Yamato entered the Double Galaxy.

So don’t worry. I’ll be talking about that and all that stuff you have heard about…NEXT TIME~!
Posted by Geoff at 2:59 PM